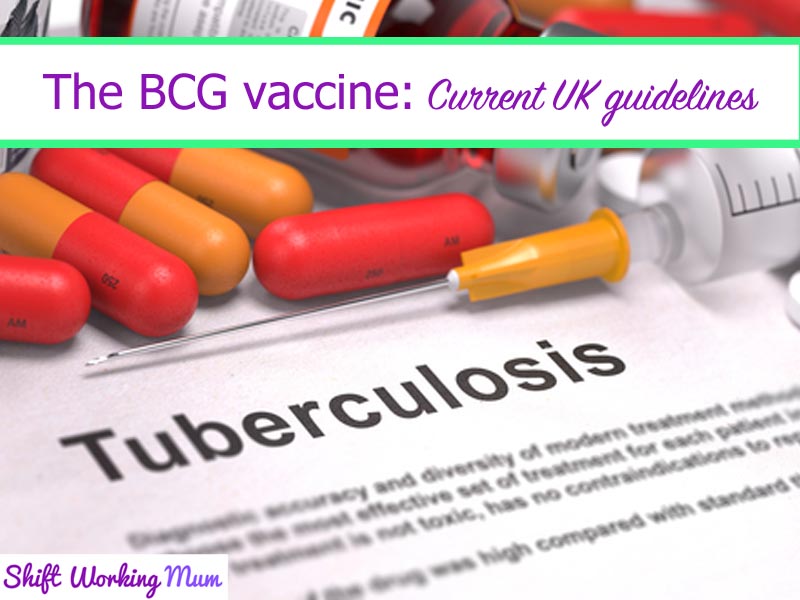 As mentioned in my post 10 reasons to get your children vaccinated, the BCG vaccine for tuberculosis has been removed from the standard UK vaccination schedule.

You can probably remember getting your BCG injection at school. With all the boys running around and punching one another in the upper arm.

A small amount of the vaccine is injected just under then skin leaving a small lump. Over time the vaccine causes scarring and a small scar may still be present on your upper left arm. It is a one time only injection and doesn’t require any boosters. The vaccine is 70-80% effective against the most severe forms of TB including TB meningitis in children.

Tuberculosis is a serious infection which affects the lungs primarily but can also affect the kidneys, bones and joints. It can also cause meningitis. TB is a serious infection worldwide with  approx 6000 new cases reported in the UK in 2017. It can be treated with antibiotics (for a minimum of six months), but multi-drug resistant forms of the bacteria are emerging. Symptoms may not become apparent for several weeks after infection.

Current guidelines regarding the BCG vaccine

BCG is not currently on the vaccination schedule and is only given to those children or adults who are deemed at increased risk of coming into contact with the disease.

The BCG vaccine is rarely given to anyone over the age of 16yrs and never given over the age of 35yrs as it doesn’t work very well. Some adults aged 16 to 35, who are at risk of TB through their workplace may be given the vaccine e.g. healthcare workers.

If your child falls into an at risk group then the vaccine is now given shortly after birth before you leave the hospital.

Working in the Emergency Department I have seen patients with suspected TB. Classical symptoms include coughing up bloody phlegm, a high fever, recent weight loss, night sweats and extreme tiredness. Suspected TB sufferers have to wear a mask and be isolated from other patients.

I know of at least one person who has contracted TB from someone at school and suffered from TB meningitis, with a prolonged stay in Intensive Care. This person was of white caucasian origin but unfortunately had children in their class who had family in Pakistan. They had been away to visit family over the summer, contracted the TB and were therefore contagious on return to school.

Despite being from a white caucasian background I have requested all of my children to have the BCG vaccine. I asked the GP when I took them for their 6 week check up and got referred to the hospital. If I hadn’t been able to get this done on the NHS I would have paid to have them vaccinated privately.

I personally believe that the BCG vaccine should still be on the vaccination schedule. The disease is a serious one, with drug resistant variants on the rise. I don’t understand why it has been removed from the schedule. There are still outbreaks of TB within the UK. Of the 106 cases of TB within Wales in 2017, 49% with in the white ethnic group (so not in the at-risk group).  Other diseases with less prevalence in the UK e.g. Diphtheria, are still vaccinated against. There were 13 cases of Diphtheria reported England in 2017 as opposed to 5102 incidences of TB.